Caving — like all other outdoor sports — is as safe as you make it. Here are some simple rules and procedures that will keep you safe underground. If you follow them, you (and everyone else) will have so much more fun.

The most important thing is to LET SOMEONE KNOW:

Which cave you are visiting.

How many people are in your group.

When you should be back from the cave.

Have a callout person, so he/she can start a cave rescue if the group isn’t out at a certain time.

Be sure that you and all the members of your group are properly equipped.

Once inside the cave, keep together. Make sure you keep track of the person in front of you and the person behind you, and let them know if they are getting too far ahead.

Always keep 3 points of contact with the cave. This could be any combination of your hands, feet, and butt. The reason for this is that if a point of contact broke at any time you will have another  hold to keep you in place.

Don’t overdo it. If you feel uncomfortable doing something, say so. Everyone has been in this situation before. Caving is not a competition! When you are part of a caving trip, you are part of a team, and it’s a team goal to get everyone through the cave and have a good time.

Always keep your helmet on, you never know when something might fall, or when you might accidentally bang your head.

If anything falls, whether it is a person, rock, or other object, the correct term to yell is “ROCK!” When you hear this, NEVER LOOK UP. Instead, try to get under cover.

Pay attention to your surroundings. This is extremely useful in remembering the route in the cave.

Caving groups should consist of at least 3 people.

You should always have 3 sources of light.

The caves we visit are owned by other people who are nice enough to let us onto their property. Remember that we are their guests. Be polite and thankful, don’t mess up the cave access for others in the future!

It is important protect the cave habitats that we enter for future generations. Being responsible cavers, here are a few rules that we always follow:

✔ Always be sure you have the permission of the landowner before crossing any land or entering any cave.
✔ Be careful where you park. A lot of caves are owned by farmers who hate finding cars parked in front of their farm/field gates.
✔ “Take nothing but pictures” – Whatever natural formations we find in the cave, we leave in the cave, even ones that have broken off and are lying on the ground. In fact, it is illegal to remove formations from a cave in both Virginia and West Virginia.
✔ “Leave nothing but footprints” – whatever we bring into the cave, we take out again. We never leave behind food trash or batteries.
✔ “Kill nothing but time” – do nothing to harm the cave environment. Other creatures including bats inhabit caves. It is important that we do not disturb them, especially during the winter when bats hibernate.
✔ When you talk to someone while caving, make sure you turn your headlamp to the ceiling or to the floor, as you might blind them for a few moments.

✔ Clothing
Wear clothes suitable for 54-degrees. Ideally, you should have an under layer made up of wicking material (polypropylene) against your body, with some durable material over it; such as jeans and a sturdy sweatshirt.

✔ Footwear
High-top boots with a lug sole are ideal, or an old pair of sneakers, anything with traction. No sandals!

✔ Gloves
This is a REQUIRED for all members. The best are gardening gloves/utility gloves. The coating of plastic on the palms and fingers, providing warmth and traction. Most importantly, it will protect the cave from your skin’s oils.

✔ Extra Protection
You may want to invest in some coveralls in order to save your cloths (usually can find a cheap jumpsuit for $20.) Just remember: any exposed skin is subject to coming in contact with hard and jagged rock. Also, think about using knee pads. They’re not a requirement, but nice especially if there’s a lot of crawling in the cave.

✔ Helmet & Headlamp
Members can use the club’s helmets and headlamps.
Three independent light sources should be taken into the cave. Typically, each caver will have a helmet-mounted light (electric or carbide), and two other light sources such as a flashlight and lighter. Remember to bring batteries, too!

✔ Cave Pack
The trip leader will typically bring their own, which contains an emergency kit. Everyone is responsible for their own food and water, so bring your own pack.

✔ Food & Water
Bring some easily-carried high energy food such as candy bars or energy bars. Pack a sandwich for longer trips. Also bring something to drink. Use only plastic or aluminum bottles … NO GLASS.

✔ Bring a set of clean clothes that you can change into after caving so you don’t mess up the car you’re riding in. You’ll appreciate this if you’re the one driving!
✔ Plastic garbage bags to put your dirty clothes and shoes in.
✔ A few dollars to help out the driver with the cost of gas money. Also, it is standard to stop for dinner after long trips.
✔ Towel and water, for washing up afterwards. Caves can be very muddy!
✔ Snacks for after your trip. Cavers can get quite ravenous after a long trip on the ride home! 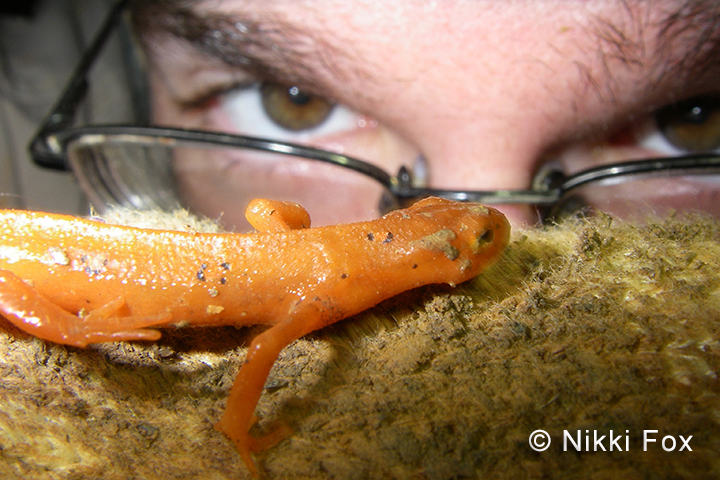 Caving – The sport of exploring caves.

Column – When a stalagmite and stalactite grow together.

Drapery – A cave formation that is a flat, wavy sheet that hangs from the ceiling, sometimes even resonates.

Exposed – A section in the cave where there is a danger of falling.

Flowstone – Sheet-like deposits of calcite formed from water cascading down over cave walls or floors.

Helmet Check! – Said when someone bangs their helmet against something, usually making a loud sound.

Lights Out – When everyone turns their lights off and experience true darkness. Usually done at the beginning of a trip so your eyes can adjust faster.

Marker – Pieces of flagging in caves at junctions to mark the way.

Mazy – When a cave has a complex network of passages, making it easy to get lost.

Popcorn – Not a food, but really a jagged formation on walls that will tear your fingers/clothes apart.

Register – A plastic tube with paper inside found near the entrance of caves where cavers can sign in.

ROCK! – The universal word to mean that something has just fallen from above. NEVER LOOK UP!

Sodastraw – A long, thin (usually white) formation that is hollow in the middle.

Speleology – The scientific study of caves and cave environments.

Speleothem – A cave formation, usually made from mineral deposits.

Stalactite – Formations hanging from the ceiling.

Stalagmite – Formations on the ground, growing upwards towards the ceiling.

WNS – White Nose Syndrome, a fatal disease that has killed off the bats in the US. It is an itchy fungus that grows on the skin and wing membranes of hibernating bats. A bat will wake up more frequently during the winter, using up its valuable fat, and dies of starvation.

Vertical – The use of ropes in caves, where cavers wear harnesses and other gear to rappel and climb out of pits and drops in a cave. 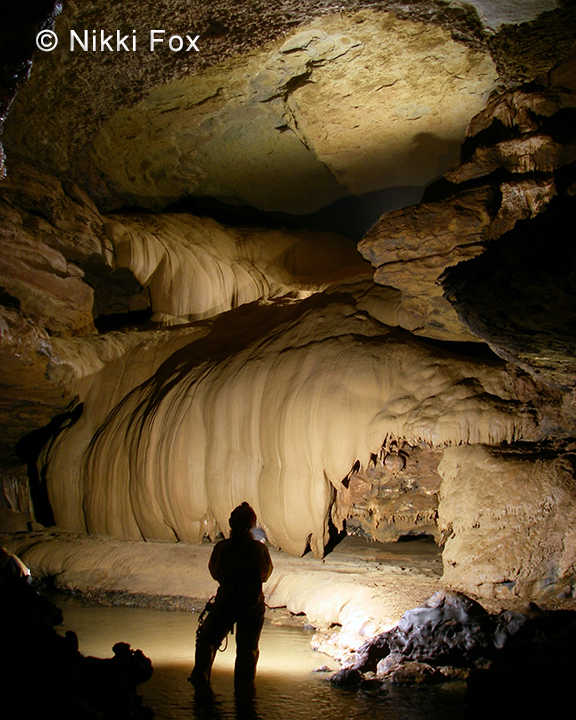