Our main objective is to give James Madison University students and area residents in Harrisonburg, Va., who are interested in caving, an opportunity to explore the Virginias’ vast underground. We stress important underground techniques and policies such as “leave no trace.” Caving is an inherently hazardous, so safe caving always comes first!

We are a member in the Virginia Area Region (VAR) and a chapter in the National Speleological Society (NSS), a national organization that represents the interests of cavers and promotes caving. Our original charter for the NSS dated Nov. 6, 1979 can be seen here. We are also a part of James Madison University (JMU), categorized as a sports club.

The grotto, on occasion, will go on other outdoor adventures; including backpacking, mountain biking, climbing, whitewater rafting and camping. We are open to any activity suggestions, so become a member and let your voice be heard. 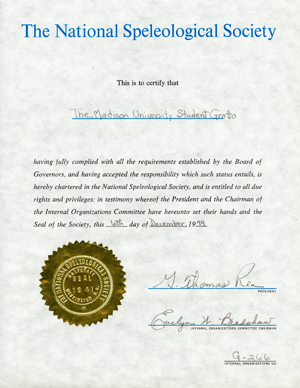 Early History of the JMU Grotto

I began attending James Madison University in the Fall of 1977, the school had just changed its name from Madison College. Being the son of an active caver, Stan Carts, and having attended OTR almost annually since birth, I tracked down the university’s Outing Club.

The Outing Club and the Madison College Grotto were interbred as a single organization. The club had two types of members, current students and older non-students. The club/grotto was fairly active doing regular trips to local sport caves like Sinnett-Thorn Mountain and Trout Cave, as well as other activities like bike touring.

After a year of observing I figured out the social structure. The older non-student men (i.e., dirty old men) would basically wait for the new crop of young women to leave home for college, and help them gain real world experience. In the fall of 1978, the dirty old men needed a single person to join the NSS or else the Madison Grotto would die officially . . . it did.

A few weeks later I gathered a group of five friends to visit Hellhole Cave. Being poor college students, we were a little short of gear and good sense. I recall that everyone had some type of rappel device, but I had the only set of ascenders. Before beginning our ascent out, I announced that in order to use the ascenders everyone had to join the NSS to form the new Madison University Student Grotto, or MUSG. Everyone good-naturedly agreed and we proceeded out.

I wrote the bylaws to forever give control of the club to the students. The officers of the club were required to be current students and to live on campus. A library was started as well as an equipment pool. Training was fairly informal. As a matter of fact, everything was informal. The club was short on administration but heavy with trips and parties. A fine balance. Our approach was to cave as a group of friends with no formal leadership. Membership swelled, parties grew, friendships were made, and of course, much caving was done. Social events were held in the D.C. area over the summer and Christmas breaks.

The club in the early years was always light on administration. We struggled to get our grotto paperwork into the administrators annually. In fact, we were threatened with official dissolution many times. No one cared that much because we were having such a good time. We did not require members to join the NSS although we easily had enough NSS members to maintain official grotto status.

The actual caving that was done ranged from local caves such as Glade, 3D Maze, Mad Steer, Devils Hole, and Lyles Pit to the Elk River area (Simmons-Mingo, My Cave, Falling Springs, etc.). We also hooked up with the fringes of the VPI grotto and visited Clover Hollow, Newberry Banes and Spring Hollow; as well as a host of other caves in the Blacksburg area. A memorable trip to Ellison’s Cave during a flood happened, led by the late and famous Frank Gibson of the VPI Cave Club.